The Cueva del Parpalló is a cave in the province of Valencia in Spain. It was last occupied around 11,000 years ago.

The panel above depicts a hunting story. The script flows in an anti-clockwise direction starting on the right with the pictograph of a running deer. Next you can see five yì 丿. Yì in Chinese means to pull or drag. In this example, I think that it means to drive. Hence we have the idea of a group of deer being driven. The deer were driven over a cliff and killed.

Here, I have annotated the left hand section of the image, so that you can see how the story unfolds. Those interested in the Chinese key to my translation should refer to the two tables below. The radical numbers in the tables are taken from the Kangxi numbering system. 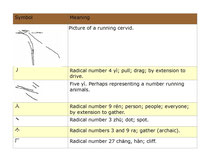 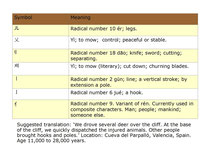