When learning a complex subject, humour can be used as an aide memoire. An example of the use of humour at Lascaux is found in the area known as the Well.

If we zoom in on the right hand side of the above image, we see that there are two versions of the Shuowen Jiezi radical number 94 bǔ卜. There is a yáng bǔ (solid line) and a yīn bǔ (broken line). Here, yáng denotes summer; the time when you have most light, and yīn denotes winter; the time when it is mostly dark.

The bison on the right has a raised tail. A raised tail is associated with calving, which for a European Bison would take place between May and July; in other words, around midsummer. The animal's intestines would be used to make summer sausage. There is an old French verb saucissoner, which means to picnic.

The rhinoceros on the left also has a raised tail, but this animal is defecating. However, the dung forms the symbol kūn ☷ from the bāguà, meaning earth. Winter is the time when vegetation dies back, returning to the earth.

The panel would be read from right to left. It therefore changes from summer to winter.

Between summer and winter, we have a sky map that incorporates the figure often described as a bird-man. Note that his erection aligns with the azimuth of the midsummer sunset. In my opinion, the bird-man represents chǒu 丑. Chǒu can mean a clown, or disgraceful, so it may be a pun. Young Chǒu or Little Chǒu, the clown is there to give us some important information, which will enable us to interpret the sky map.

Chǒu is the Second Earthly Branch.

I have not found a record of the origin of the term earthly branch. The term is more than 3,000 years old, and associated with the calendar and timekeeping. I therefore think that the origin may be found in astronomy.

What is especially interesting is an apparent connection between earthly branches and asterisms located in the Milky Way.

An earthly branch marks a point in a cycle. In the case of the summer solstice (the scene depicted in the Well), it would refer to the point of maximum yáng at which daylight hours stop increasing and begin to decline. The summer solstice is a point of change; a tipping point.

The cycles are determined by qì 气, which is sometimes interpreted as the flow of energy. Another translation for qì is climate.

Some archaic forms of the character qì consist of three lines, which resemble the character sān 三². One definition for sān in the Shuowen Jiezi is 天地人之道也, which translates as: sky, earth, person line.

The small seal script form of qì is shown below on the right. Note that the lines of this version of the qì character are curved incorporating the idea of movement. A change in the relative position of the sky, the earth or the observer will result in a change in the climate.

So how does the Well at Lascaux depict the qì of a moment called Chǒu?

To assist with interpretation I have put together a modern sky map of the same scene as that in the Well.

Chǒu is associated with the double hour 1am to 3am. I have therefore created a sky map for Lascaux as at UTC 1:57 on 21 June 2013, which is my estimate of the solar time 1am. The images in the gallery below are all versions of the same sky map. 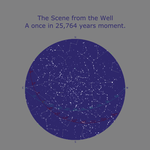 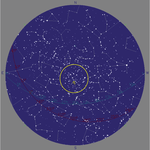 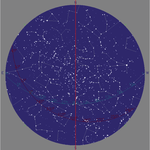 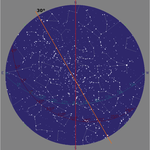 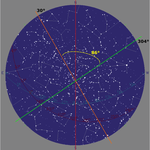 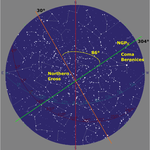 The observer at Lascaux is facing south (bottom of the panel), with north above and behind her. She therefore determines the position of the meridian.

In the second image in the gallery, note that I have circled the asterism known as the Northern Cross, and labelled the star Eta Cygni (η).

In the third image note how the red line representing due north passes through Eta Cygni.

Due north is a modern Western concept. In ancient China due south was the key reference point for orientation. The small bird sits on top of a third bǔ. It is a yáng bǔ because it points south towards the south celestial pole. The meridian is therefore clearly marked in the image in the Well.

In the modern sky map Eta Cygni is the star that sits on the north south line. The Chinese name for Eta Cygni is Niǎndàozēngwǔ 輦道增五, which translates as Fifth Additional Star of the Imperial Passageway. It may be a mere coincidence, but the number five is associated with 'the middle'.

If you think in terms of imagery, the small bird is sitting in a tree, from which it surveys its environment. It is the central point from which key measurements are made.

The season and time of day are determined by the Earth’s position relative to the Sun.

The orientation of the cave in relation to the sunset, and the imagery in the Well tell us that the season is midsummer, and that the day is midsummer’s day.

Received wisdom about Chǒu gives us the solar time 1am.

The point in the cycle is determined by the transit of a star in the Milky Way across the meridian, but only when the star’s associated asterism is aligned at a specified angle to the meridian.

In received wisdom, Chǒu is associated with the direction 30°. In the fourth image, you can see how an orange line at 30° to north, and passing through Eta Cygni aligns quite nicely with the Northern Cross. My interpretation is that the bird-man symbolises the Northern Cross.

In the fifth image, I have added a green line at 304°, which corresponds to the azimuth of the midsummer sunset. This line also passes through Eta Cygni, and might equate to the bird-man’s erection. The angle between the orange line and the green line is 86°. It is almost perpendicular. Thus it points in a direction that is relatively close to the galactic pole. The north galactic pole is situated in the asterism Coma Berenices.

In the sixth image, I have marked the estimated location of the north galactic pole with a cross.

In conclusion, the sky maps show that at the summer solstice 2013, the ‘picture’ in the sky matched the picture in the cave.

Think of it as looking at a clock. You have an imaginary marker in the sky, which is the north south line. When certain stars float past the marker in a specific formation, you can identify a precise moment in the cycle of time.

The moment depicted is a very rare occurrence. The change in the orientation of the Earth’s rotational axis (precession) means that the stars featured in this article are only aligned in a way that matches the scene in the Well once every 25,764 years.

The Bison and the Rhinoceros

In some dictionaries, the translations for bǔ卜 include divination and mysticism, but in Cave Script its meaning is always scientific: diagnose, determine, analyse, measure.

Yīn and yáng are concepts associated with the Yì Jīng. The appearance of the symbols at Lascaux gives us proof of their great age.

It is interesting that 2013 was the beginning of a new cycle in Mesoamerican astronomy, and that, if my analysis is correct, the European astronomers also regarded 2013 as an important point in a calendar.

Stand in front of the mirror facing forwards with your hands by your sides. Using your left hand to indicate, try telling an imaginary person that something is ‘over there’.

Sky maps for an observer at Lascaux: Your Sky by John Walker: Annotation added by Lynn Fawcett: http://www.fourmilab.ch/yoursky/: Accessed: 7 March 2014

1. Dr Jègues-Wolkiewiez took precise measurements for the painting in situ. Her interpretation was that the lines mark the azimuths for the sunrise. My interpretation is that they mark the azimuths for the sunset. Chantal Jègues-Wolkiewiez: Datation du Puits de Lascaux, September 2006: http://www.archeociel.com/datation_du_puits_de_lascaux.htm: Accessed: 21 August 2012

2. Archaic versions of the character qì that resemble the character sān: Examples include reference numbers: B00584 and J00883: Richard Sears, 2013: Chinese Etymology: The history of Chinese characters: http://www.chineseetymology.org/CharacterEtymology.aspx?submitButton1=Etymology&characterInput=%E6%B0%94: Accessed: 17 March 2014